The truth is that Crete has a flourishing culinary scene, thanks to the Cretan diet, which is famous all around the world as the perfect model of a balanced Mediterranean diet.

Crete, the biggest island in Greece, is in the gastronomy game for many years! Using locally produced first ingredients, Cretans create delicious and healthy traditional recipes, thanks to which they score some of the higher longevity rates worldwide!

So, what’s the secrets of the renowned Cretan diet and what are the best Crete restaurants to taste the local delicacies?

Keep reading to learn everything about it! 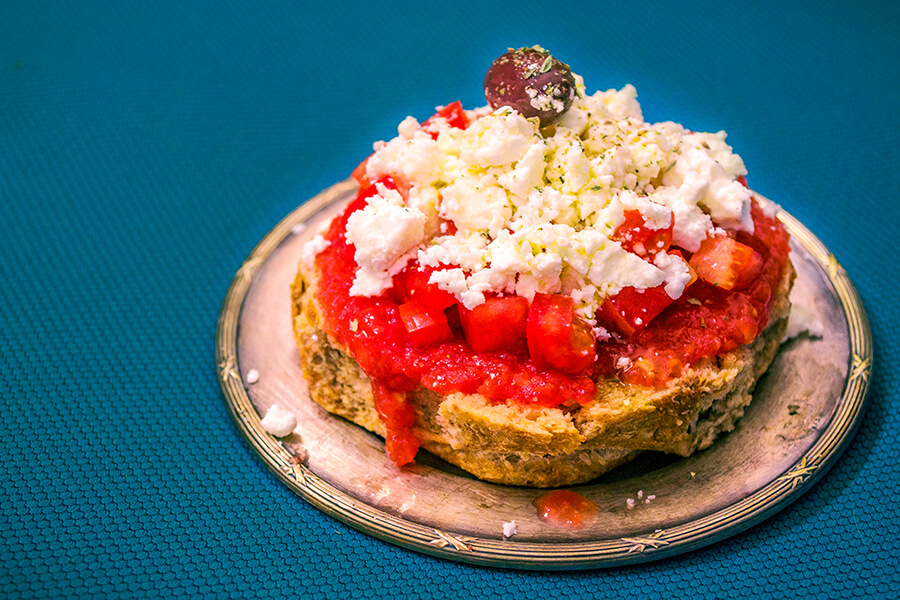 The Cretan diet started becoming famous in 1948, when the Rockefeller foundation conducted a research in Crete, in order to come up with a diet that would be the model of the Mediterranean diet.

But what makes Cretan diet the queen of the Mediterranean?

Its secret hides in the pure, locally produced first ingredients. Virgin olive oil, wine, herbs, such as thyme, oregano and rosemary, fresh vegetables, dairy products, meat, and pasta are the main ingredients on which the Cretan diet is based.

Although Crete is an island, the Cretans aren’t big on fish and prefer meat and sausages, instead! Combining different flavors and tastes, they create gastronomy wonders, which you can taste in almost all Crete restaurants and taverns!

Are you ready to drool? 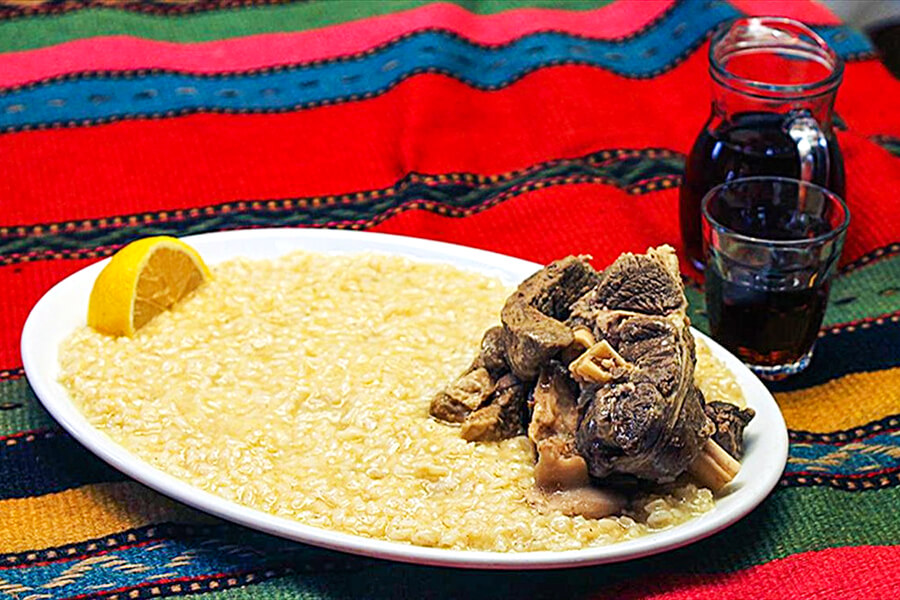 One of the best things to do in Crete is, hands down, to taste the local delicacies. You bet there is a hearty amount of dishes you should definitely try!

Thanks to the variety of local produce and the traditional recipes that have remained untouched through the centuries, in Crete, you can eat amazing food!

So, don’t leave Crete without eating…

Dakos or Koukouvagia or Kouloukopsomo, as some of the locals like to call it, is one of the most famous local dishes. Dakos is basically a barley rusk, soaked in water, sprinkled with olive oil and topped with tomatoes and mizithra, a local soft cheese. Dusted with salt, oregano, and pepper, it is usually served as a starter.

Kalitsounia are tiny cheese pies, shaped into cups or stars. They consist of pastry dough, filled with local soft cheeses, such as mizithra or anthotiro and they are topped with local honey. Although Kalitsounia is a savory delicacy, the honey deliciously transforms it into a sweet one! Thus, it is usually served as a dessert or a starter, accompanied with raki, a local alcoholic beverage.

Cochlioi Bourbounistoi are basically fried snails! It might not be the traditional Greek treat you had in mind, but this is one of the most delicious and unique local delicacies. The snails are initially fried with flour in olive oil and then sprinkled with wine or vinegar.

This specialty used to be served in traditional Cretan weddings, but today you can find it in almost every tavern in Crete. Gamopilafo is rice cooked in meat (lamb, roster or goat) broth with lemon juice and stakovoutiro, a rich local butter. It is usually served with meat.

Crete is popular for its cheese produce! Almost every region, town and village in Crete has its own cheese. Made of goat or sheep milk, Cretan cheeses are delicious and a basic ingredient of the best traditional recipes. Definitely try graviera, a rich hard cheese and mizithra, a tasty soft cheese.

Kreatotourta is one of the most hearty local delicacies! It is basically a pie stuffed with goat, lamb, several kinds of cheeses and cinnamon. This dish is usually made after Easter, as a way to use the leftovers of the traditional roasted lamb.

Sfakianes pites (or Sfakia pies) are yummy thin fried pies stuffed with several Cretan cheeses, such as mizithra and anthotiro. They are usually topped with thyme, honey and walnuts and served as a “meze” (complement) for raki or as a dessert.

Hirina Apakia (smoked pork) is one of the Cretan delicacies that have a quite long preparation process. The pork is marinated in vinegar and cooked on a fire lit up using locally produced herbs. The result is a delicious smoked pork with a slight herbal taste, thanks to the herbs.

What are the best Crete restaurants to taste the local delicacies?

Are you ready for a culinary adventure? 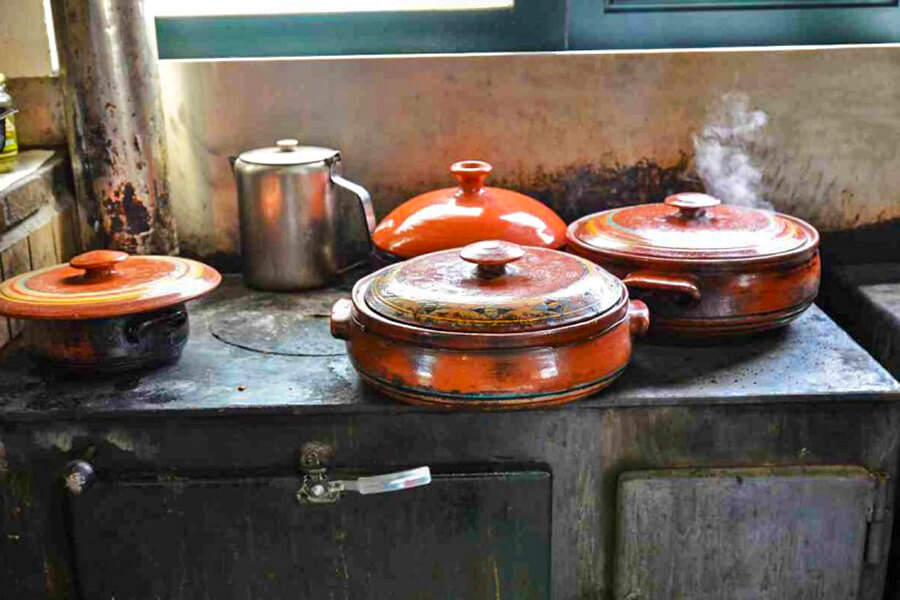 Ntounias is one of the best traditional taverns in Crete and in the top 20 best taverns in Greece. In here, everything is cooked traditionally in wood stoves, with the best locally produced first ingredients! The tavern’s owner creates delicious dishes, such as goat with herbs, cabbage rolls, slowly cooked meat and freshly fried potatoes. Don’t leave without tasting their excellent wine! 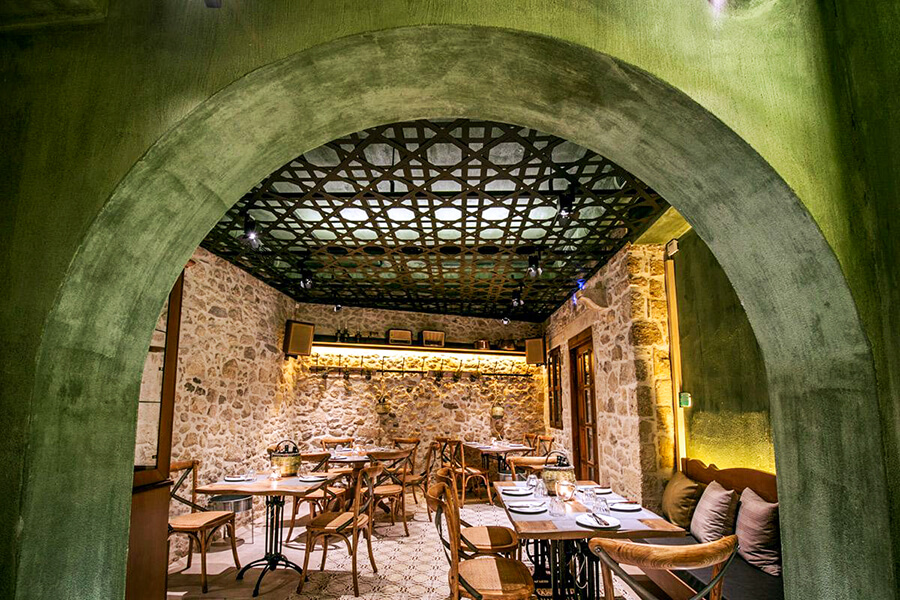 Peskesi restaurant is housed in a beautiful historical building in the heart of Heraklion town. What’s more, it has been awarded as one of the most beautiful restaurants in Europe by the “Restaurant and Bar Design Awards”. Its menu is based on traditional recipes with modern twists and sophisticated cocktails. 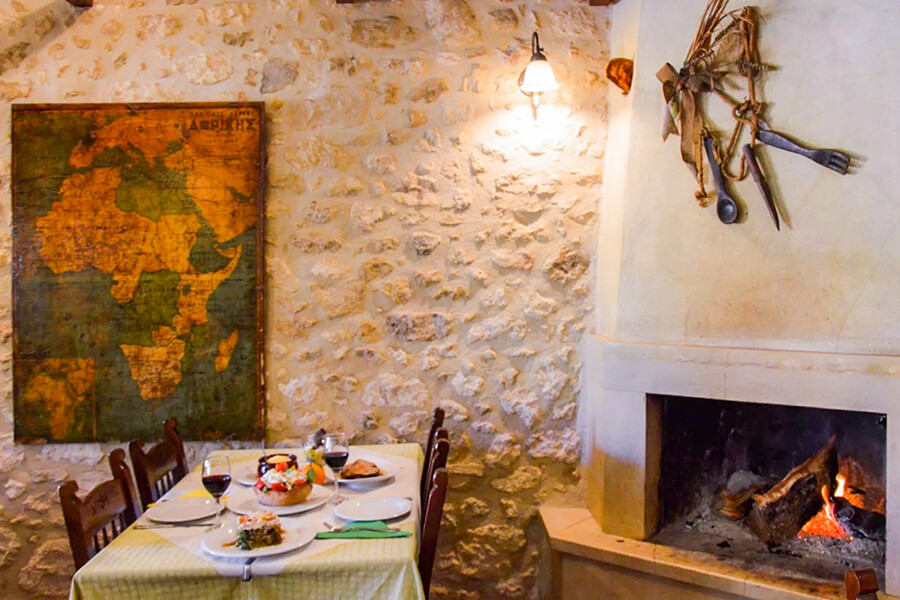 Located at the tiny Goulediana village, Goules tavern has a beautiful setting. Both at the beautiful courtyard and warm interior of Goules tavern in Rethymno, you’ll feel like home. The menu of this tavern includes traditional homemade dishes made of local fresh ingredients, such as cheese with plum sauce, Cretan salad and pork with orange. Definitely try their organic wine! 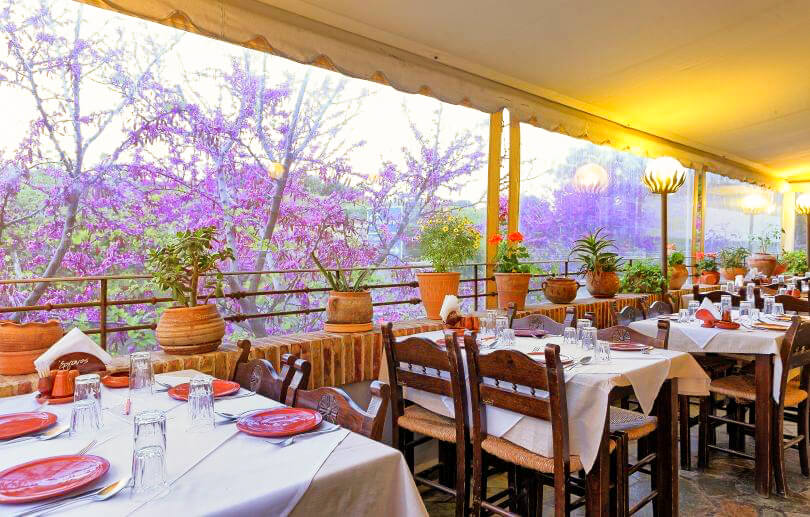 Erganos is a traditional Cretan tavern operating since 1986 in Heraklion. Its fresh ingredients and flavor combinations make it an ideal choice for those who want to have a taste of the island’s tradition. Try their soufichta (local pasta) with anthotiro (traditional white cheese), the herbs pies, the meat pie and the sausages. 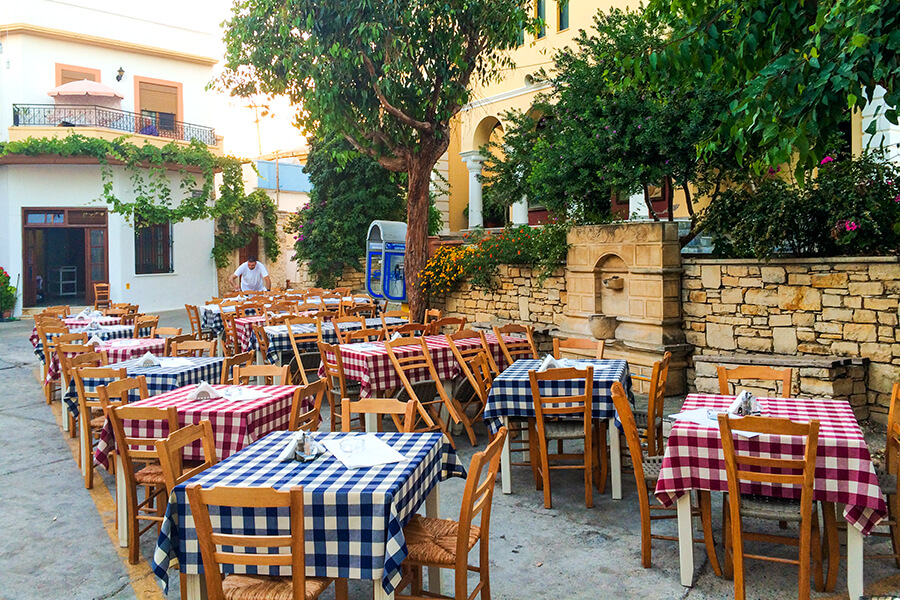 Located on a little square in Mesochoria village, Ta Souvlakia tou Gagani is an ideal place to taste -as its name indicates- the famous Greek delicacy, souvlaki. Apart from souvlaki, though, this traditional tavern serves hearty meat dishes, fresh salads, fries with eggs, cretan dakos and other local specialties. 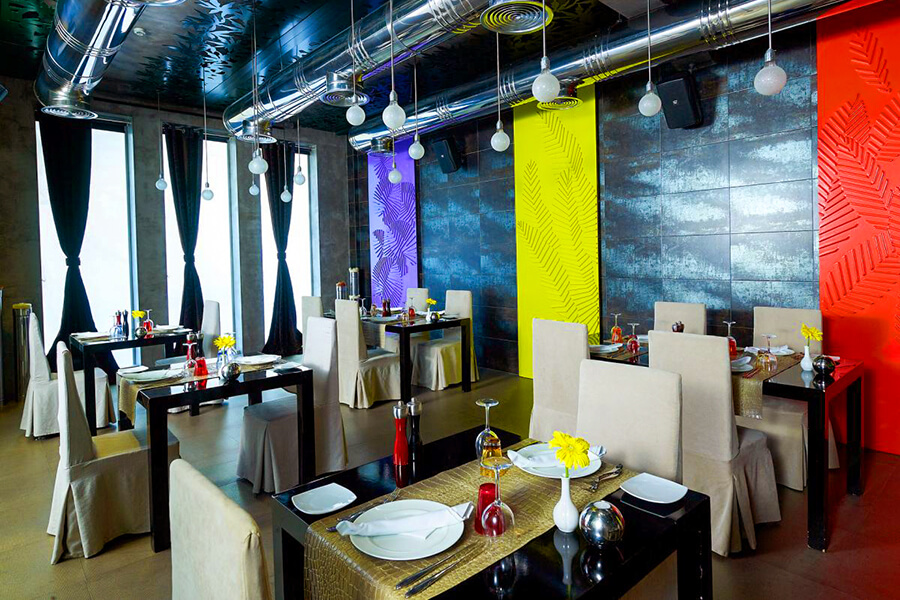 How about Cretan delicacies with a gourmet twist? Brilliant Gourmet Restaurant, the restaurant of Lato boutique hotel, is the place to go! Using raw local ingredients, this restaurant creates a selection of luscious gourmet dishes, such as shrimp with blueberries, beef with Cretan sauce, linguine with salmon and chicken breast stuffed with feta cheese. 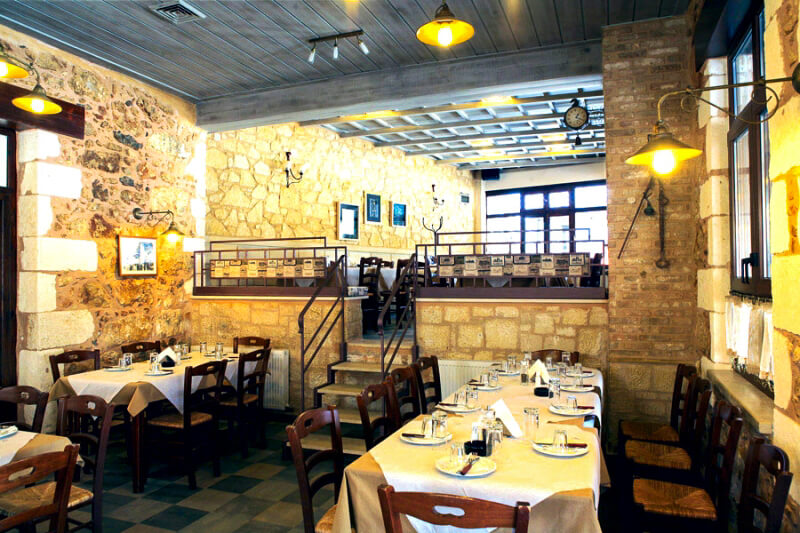 Alekos is a family run tavern located in Armeni village, close to Rethymno. Operating since 1932, Alekos tavern is still loyal to the Cretan tradition, while the owner always welcomes the clients, as if they were long lost friends. Sit at Alekos tavern to taste pork with herbs, homemade bread, chochlioi (cooked snails) and sfakiani pita with honey.

Let us take a wild guess!

By now, you must already drool, right?

It’s up to you now. Book your holidays in Crete and taste the best local delicacies at the excellent Crete restaurants. Because, trust us, no visit to Crete is complete without having a taste of the island’s culinary delights!

Discover our beachfront villa in Palaichora