So, you’re planning your trip to Crete and wonder what the best things to do in Crete are?

First of all, no worries! Crete has the magical ability to please everyone.

Whether you’re an adventure junkie, a water sports fanatic or a seeker of relaxation, Crete got you covered!

There’s a whole heap of things to do in Crete! But with so many options, choosing might be hard…

Well, we did the hard work for you and we present you our ultimate list of the best things to do in Crete! 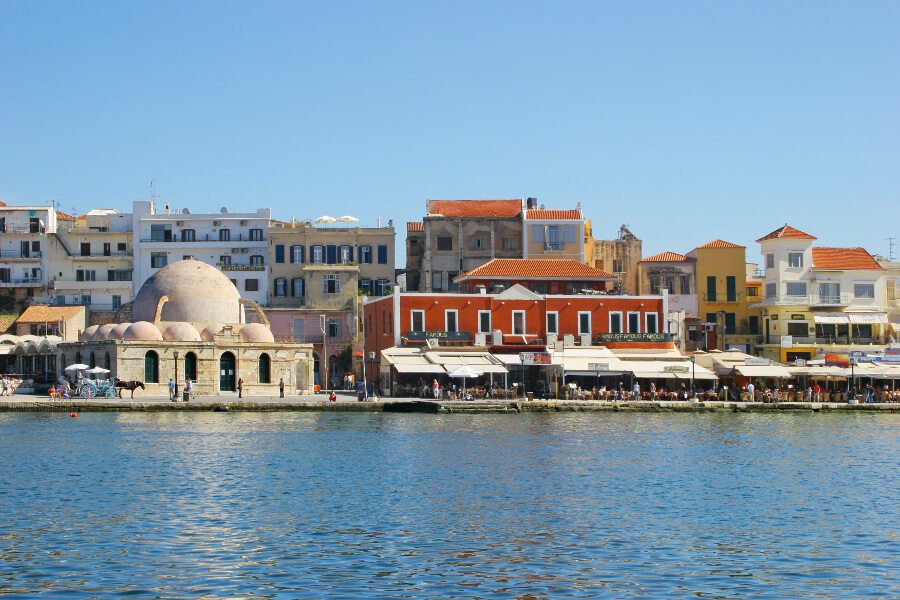 Chania town is hands down one of the most beautiful coastal towns in Crete!

Located on the northwest coast of west Crete, Chania not only boasts a breathtaking natural landscape but oozes a fairytale-like charm, thanks to its strongly influenced by the Venetians, architecture. The elegant villas, the picturesque Venetian port, its imposing lighthouse, and cobblestone alleys create a magical atmosphere that captivates the visitor.

Tip: Chania port is the most romantic spot to watch the sunset! Even better, sit at one of the bars and restaurants on the port and enjoy this spectacular scene, having a drink or tasting the local delicacies. 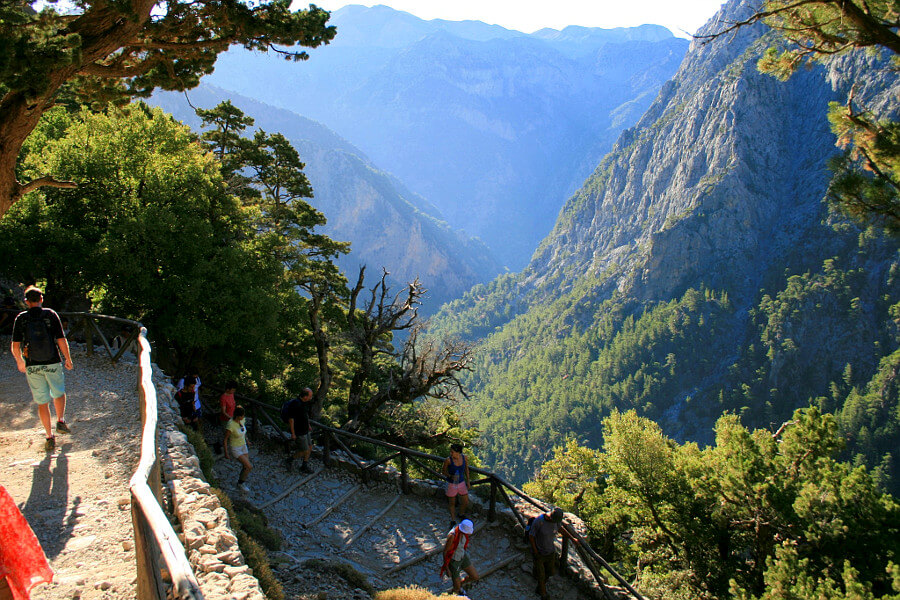 Whether you are an adventure seeker or not, a hike at Samaria Gorge is a must thing to do in Crete!

Did you know that Samaria Gorge is the biggest gorge in Greece and one of the most famous gorges in Europe? Located on the south part of the Chania region, Samaria gorge is 15 km long and can be crossed in 5 to 7 hours, depending on your fitness level!

The beautiful hiking route of Samaria Gorge starts from Omalos plateau and ends at the seaside Agia Roumeli village, passing through a mesmerizing verdant landscape. As you walk through the lush nature and the towering mountains surrounding Samaria Gorge, you’re very likely to come across many animal species that find shelter there, such as the famous Cretan kri-kri goat and Cretan weasel.

Tip: Due to its popularity, Samaria Gorge is visited by thousands of tourists, especially in the summer. Your best bet is to avoid visiting it in the peak season or start your hike as early in the morning as possible.

Dive into history at the ancient town of Knossos 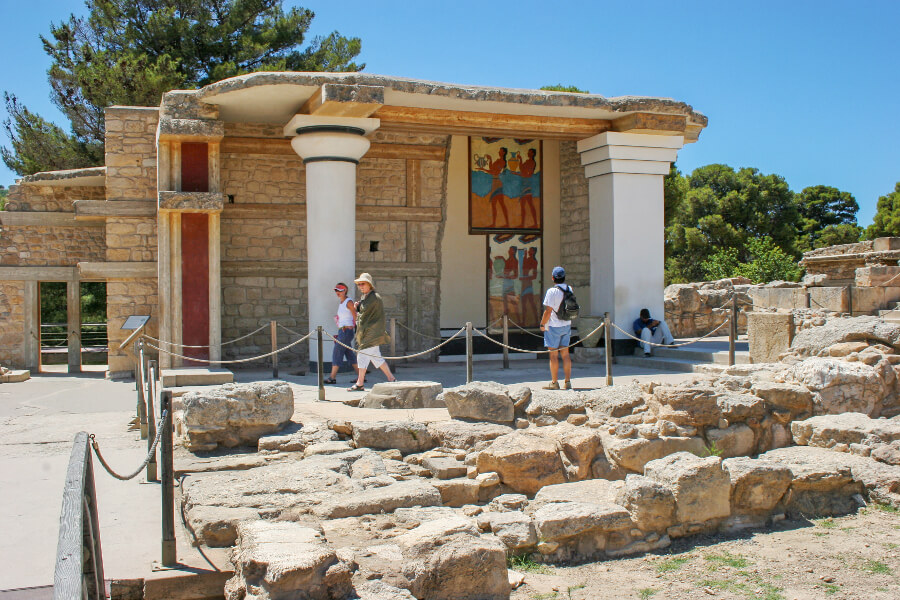 Perched on Kefalos butte, in a landscape carpeted by olives, cypresses, and vineyards, Knossos encapsulates a huge part of Crete’s historical past.

Knossos used to be a lively town from the Neolithic age until the 5th century A.D. and home to the wise King Minos. The center of this beautiful ancient town was Knossos palace, an imposing building that was discovered through the excavations that Sir Arthur Evans made in the area between 1900 and 1930.

The interior of Knossos palace is simply stunning: Colorful murals and imposing pillars will travel you back in time.

Fact: The ancient inhabitants of Knossos seem to have been innovative architectures and manufacturers, as they invented constructions such as air shafts and a sewage disposal network. 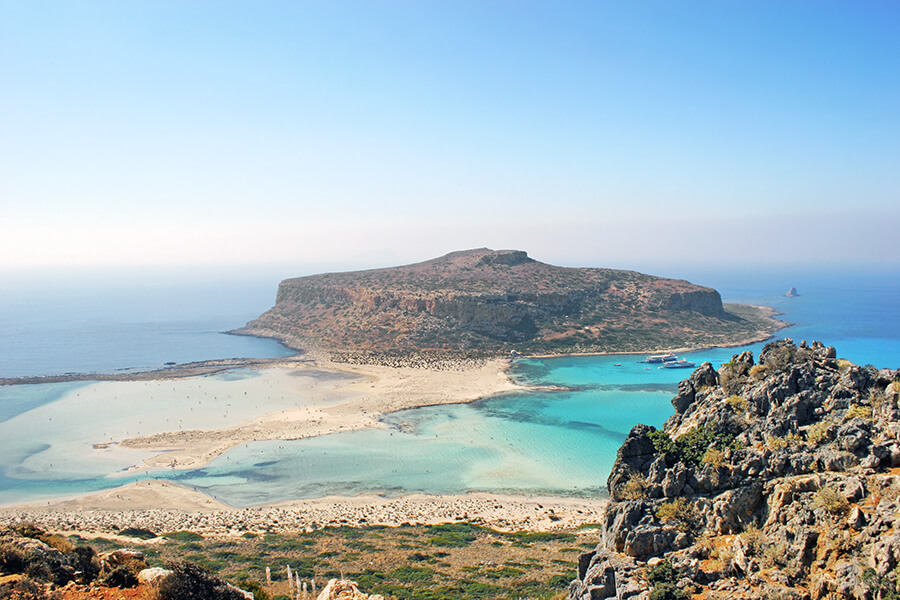 Well, many of you may already have this one in your bucket list! Are we right?

The truth is that Balos beach probably boasts the most spectacular landscape than any other beach in Crete! It is, without any doubt, one of the best Chania beaches.

Located on the northwesternmost part of Crete, Balos beach is one of the most famous beaches not only in Greece but also in the whole world! The sugar-white fine sand that in many parts is pink due to broken shells, the mesmerizing turquoise waters, the exotic ambiance, and the wild natural landscape make this beach an absolute paradise! What’s more, it’s an excellent beach for families with little kids, thanks to its shallow waters.

The best way to reach Balos beach is by a small boat from Kissamos. Nevertheless, if you prefer to use your own car, know that the biggest part of the road leading to Balos beach is a dirt road. What's more, the hardest, yet the most rewarding way to reach this beach is by following the 3-hour hiking route starting from Kaliviani.

Get your camera ready for some divine shots!

Loutro is a fishing village situated 71 km south of Chania, nestled in a little turquoise bay. Don’t expect to find enormous buildings and luxurious Crete hotels in Loutro! Still untouched by mass tourism, Loutro is a remote village full of cute whitewashed houses and fish taverns. Given that Loutro has neither crowded roads nor cars, it’s a good place to stay, if you seek tranquility.

What’s more, Loutro village is the perfect base for excursions to beautiful nearby beaches, such as Glyka Nera, Foinikas, Lykos and Marmara. 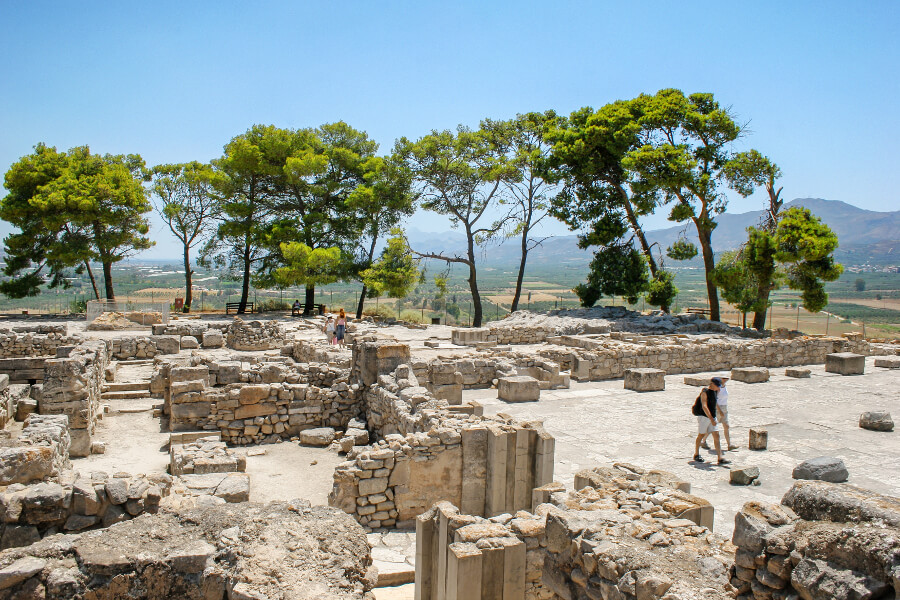 Heads up history buffs! This is another archaeological site!

Nestled in the heart of Messara valley in central Crete, Phaistos Minoan palace is one of the most important monuments in Crete. This palace belonged to a fully developed ancient town that thrived in the fertile Messara valley from 6,000 B.C. until the 1st century A.D. It is a typical sample of a Minoan palace, built around a central courtyard with rooms, such as the king’s and queen’s apartments, storage rooms, a theater, and workshops.

Fact: Excavations carried out in 1900 discovered ancient buildings that are preserved until today.

Eat all the Cretan food 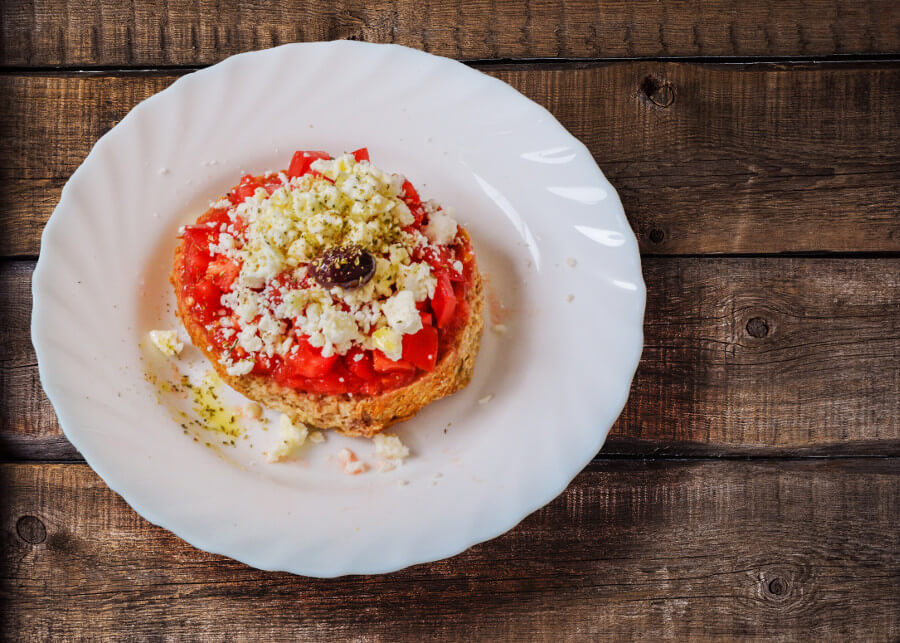 It’s not a secret: Cretan food is divine! Trust us, there’s no way you visit Crete and not gorge on the yummy traditional dishes! Besides, it is one of the best things to do in Crete.

Influenced by the Turkish, the Arabs and the Venetians, Cretan gastronomy is based on herbs, rusks, vegetables, pasta, cheese, olive oil, and meat.

So what are the best traditional Cretan dishes you definitely need to try?

Sfakiani pita (pie) is a thin cheese pie, topped with honey and nuts. It can be served either as a starter or as a dessert!

Hohlioi (a kind of snails) is one of the most famous Cretan delicacies. They are usually fried with salt and rosemary and are mainly served as a starter.

Stamnagathi is a kind of herb with a strong bitter taste. Stamnagathi is usually frizzled in a frying pan with garlic and onion and then served with fried eggs.

Kalitsounia is, hands down, one of the most legendary Cretan dishes! They are small pies, stuffed with cheese, honey and cinnamon. They are served both as a starter and as a dessert.

Sioufichta is a kind of tube-shaped pasta. They are home-made with flour, water, salt, and olive oil and served with tomato sauce and grated cheese.

Cretan Dakos is one of the most popular Cretan dishes! It is basically a big barley rusk topped with tomato sauce, cheese, olive oil, salt, pepper, and oregano. 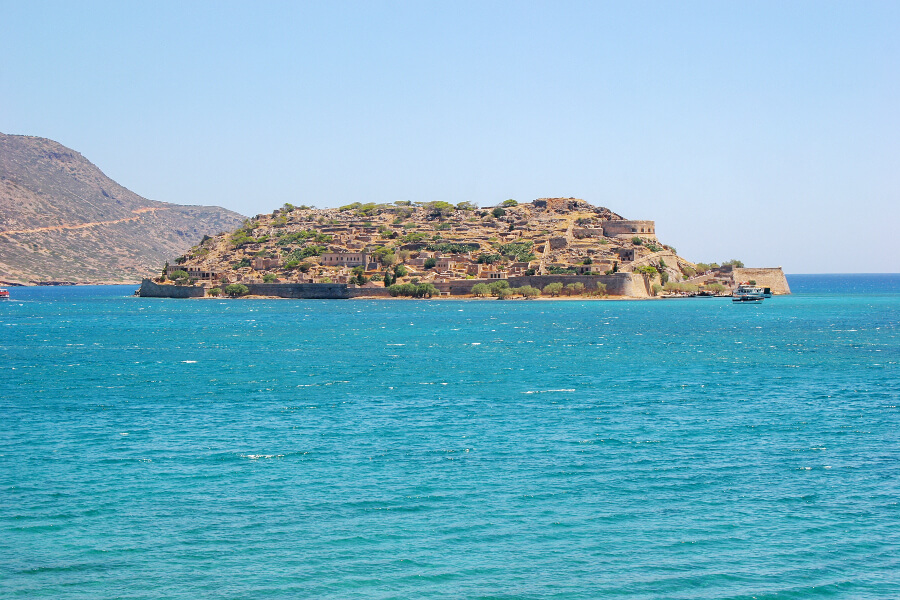 Spinalonga is a small islet with a rich historical past, located in front of Elounda in East Crete. Spinalonga used to be known as the “Lepers island”, as it was the place where lepers from Crete and Greece were sent to isolate themselves until 1957. The lepers, despite their illness, created their own community and kept on educate themselves and work.

Strolling around the cobblestone alleys of this abandoned island will bring in mind images from the famous book “The Island”, by Victoria Hislop, which referred to Spinalonga!

These days are far gone, though! Today, Spinalonga is a popular attraction for tourists who visit it to explore the remains of the houses that tell the history of another era. It is actually the most visited archaeological monument in Crete after Knossos!

Tip: You can reach Spinalonga by small boats departing from Agios Nikolaos, Elounda or Plaka.

From swimming in idyllic beaches to sightseeing and tasting local delicacies, there’s a great variety of things to do in Crete!

So, if you want to escape the ordinary and live a unique holiday experience, there’s no point in waiting. Book a top hotel in Crete and let the adventure begin!

Discover our beachfront villa in Palaichora